4 technological advances that transformed the world of international business

Aside from major corporations importing and exporting products, international business was a seldom thought about topic 60 years ago. Improvements in technology have completely reshaped the landscape of what’s possible, even for small businesses, on an international playing field.

Communication is lighting fast and supply chains don’t even require human-to-human interaction anymore. Expanding your business outside the United States definitely takes some getting used to, but it allows you to reach completely new populations and unlock expansive growth potential.

Let’s take a closer look at how international business has evolved thanks to advances in technology. 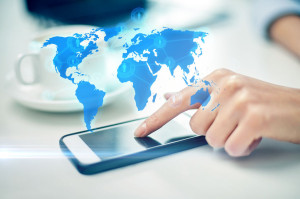 Due to economic prosperity in the 1950s, the world began to see major changes in container ships and their capabilities. The rate of improvement in technology for container ships has steadily increased over the years, offering greater cargo size capacity, improved fuel efficiency, and speed.

To get an idea of how much things have improved, consider this: in 1950 a cargo ship had a capacity of about 500-800 TEU. Modern cargo ships have a capacity in the range of 21,000 to 25,000 TEU. A similar trend is found in the world of airplane freight where an estimated 61.5 million metric tons of cargo was transported in 2019.

Computers have become such a central part of everyday life, and many of us have a suite of software we rely on to get through the day. Software is unique in that it has unlimited distribution. In fact, the only thing stopping people from acquiring better software is a poor internet connection. Anything that requires a physical product, on the other hand, requires shipping and manufacturing.

The Internet has become blazing fast, even across oceans. That allows us to do things like a chat over video, which has unlocked never before imagined opportunities. Centralized, online software and data, also known as cloud technologies, have made working from anywhere seamless. Being able to access, share, and simultaneously edit a document from Australia or Russia has companies rethinking their products and employee structures.

In 1948, the general agreements on tariffs and trades (GATT) formed. The goal of GATT was to improve international trade by getting rid of trade barriers. In 1995, the World Trade Organization (WTO) replaced GATT which further facilitated international trade. The WTO has over 150 countries involved today.

If you are planning on engaging in international business and need expert translation and localization services contact us.