Many of the world’s current languages have been around for centuries to millennia. Historians find it quite difficult to figure out exactly where and when some languages actually began. 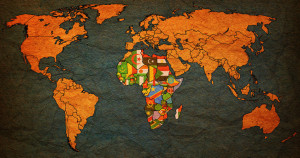 The Tamil language, for example, is possibly the oldest, with origins dating as far back as 5000 years, but its origins are still a topic of debate. There are many factors that make sorting out the details of such things so difficult. One obvious one is that the technology and preservation of information were nowhere near what they are today. Another is that languages oftentimes do not start at specific moments in time. Rather, languages are slowly developed due to things such as immigration and trade.

We outlined in a blog earlier how much the same language can differ depending on where you are in the world. Luckily for future historians and linguists, the origins of languages developed in the last few decades or centuries are much more well known and documented.

Let’s take a look at some of the world’s youngest languages.

Spoken in Australia by 350 people, Light Warlpiri is one of the newest languages in the world. It began in the 1980s and was first documented by Carmel O’Shannessy, a linguist working for the University of Michigan. Its parent languages are Warlpiri, Kriol and Australian English. The majority of speakers are under the age of 40.

Esperanto is spoken internationally by an estimated 30,000 to 180,000 users. What makes Esperanto particularly intriguing is that it is a constructed language. In other words, it is a language that was specifically and artificially created. Ophthalmologist L. L. Zamenhof created the language in 1887 with the goal of it being used by all for international communication. It’s most commonly used in East Asia, Europe and South America.

Coming in as the most well-known language on the list is Lingala. It is estimated to have 40 million speakers, 15 million of which are native. This is incredibly impressive considering the language is only about 120 years old. It is the most common language spoken amongst indigenous people of the Democratic Republic of the Congo. It evolved from the Bobangi language due to trade along the Congo River around 1900.

Gooniyandi is the least common language on the list, and, despite only being about 40 years old, is already considered to be an endangered language. It is the language of about 100 people in Fitzroy Crossing in Western Australia. Children growing up in the area learn Kriol instead. Recognizing it being endangered, some programs have started efforts to preserve the language by teaching it in school.

Be sure to consider International Translating Company for all of your translation needs. Visit our website or call 888-415-1580 to get started.